To All Studiocode Users
macOS Sierra (10.12) will be released by Apple on September 20, 2016.
Please make note of the following:
? Do NOT upgrade to macOS Sierra when it is released
? Turn off auto Mac OS X update installs. Learn how here.

How do I find my current Studiocode and Mac OS X versions?
1. Launch Studiocode
2. Click on the Studiocode menu in the top left corner of the screen near the Apple and choose "System information" 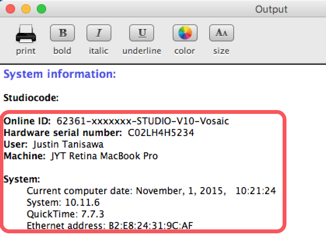 What if I'm running Studiocode v5 or earlier?
Only the first of the two announcements pertains to you. You may disregard the second announcement.

What if I'm running Studiocode v10 on Mac OS 10.11?
Only the first of the two announcements pertains to you. You may disregard the second announcement.

Why?
Supporting older operating systems reduces our ability to fix bugs and make enhancements. Supporting more recent operating systems makes it easier for us to respond to issues quickly, build new functionality, and develop better products for our customers.

Why Now?
It's important that all Studiocode v10 users upgrade to Mac OS X 10.11 (El Capitan) before September 20, 2016 since an OS upgrade after that date would take one directly to macOS Sierra, which is not advisable yet.

What else?
If you have any questions, please submit them to support@vosaic.com